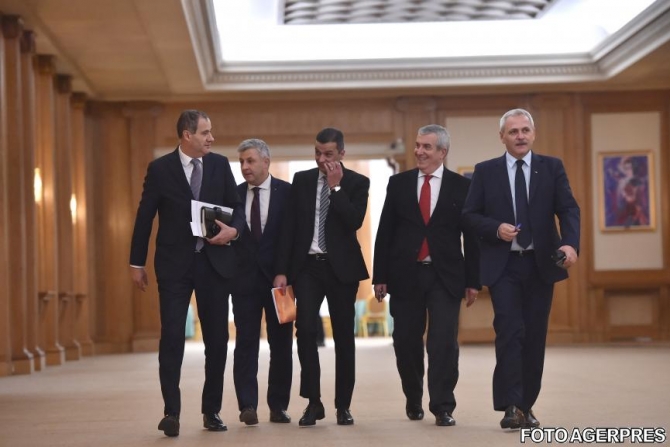 "No minister can be held accountable for his political opinions or for actions carried out for developing or passing a law with regime of law", said CCR judges.

In other words, the government members cannot be criminally liable if they adopt acts in breach of the law.

"The Court notes that the assessment of the opportunity of adopting an emergency ordinance, in terms of the decision on legislating it, constitutes an exclusive prerogative of the delegated legislature, who may be censored only under the conditions provided by the Constitution, only through parliamentary control respectively (...). So only Parliament can decide the fate of the Government law, by adopting an approval or rejection law. (...) Given the constitutional provisions invoked, the Court finds that no other public authority, belonging to other powers than the legislature, cannot control the Government law in terms of lawmaking act opportunity", says the motivation published on Friday on CCR website.

In addition, the Constitutional Court held that all that DNA introduced as material elements of a crime are only personal judgments or critics made by the authors of the denunciation made on the legality and on the opportunity of the act adopted by the Government, and in this case it was necessary to classify the file.

"All the facts complained were actually related to aspects concerning the procedure for adopting a legislation, namely issues of opportunity and legality which do not fall under the control of criminal investigation bodies, regardless of the legal classification decided by the prosecutor. Since, only by itself, the adoption of laws cannot constitute the material element of crimes, the Court finds that the facts claimed by the denunciation which led to the drafting of File No. 46 / P / 2017 (...) cannot fall under criminal law, regardless of the legal classification established", reads the quoted document.

"They violated the separation of powers principle"

"It appears to show that the Public Ministry, as part of the judiciary authority, was deemed competent to verify the oportunity, the compliance with legislative procedures andthe leg, implicitly, the legality of the adoption of the Gov't Emergency Ordinance. Such conduct is equal to a serious violation of the separation of powers principle (...), because the Public Ministry not only exceeds its powers under the Constitution and the law, but it aroggates the duties that belong to the legislature or to the Constitutional Court", reads the motivation.

"Triggering an extensive criminal investigation that resulted in raids at the Ministry of Justice, raising acts, hearing a large number of civil servants, secretaries of state and ministers resulted in a state of tension, mental pressure, even when undergoing regulation procedures, paving the way to a blockage in the legislative work. Thus, subject to a fear triggered by the criminal investigation activity and by the formulation of future charges that may determine the scope of criminal liability, the government is locked in its work by the legislature. The circumstance created empties of content the constitutional guarantee regarding to the immunity inherent in the decision making of legislation, from which benefit the Government members, guarantee which is specifically intended to protect the mandate against possible pressure or abuses that would be committed against the person occupying the position of minister, immunity assuring them his independence, liberty and security in exercising his rights and obligations under the Constitution and laws", reads the motivation.

In this situation, CCR found a conflict of constitutional nature between DNA and the Government, which, as guarantor of the Constitution supremacy, should settle it, showing the conduct that public authorities must comply with.

"Regarding the Public Ministry – Prosecutor's Office with the High Court of Cassation and Justice – the National Anticorruption Agency, the conduct complying with the Constitution transpires from those stated above, namely from exercising the powers established by law in accordance with the constitutional provisions on the separation of powers and, therefore, the abstention from any action which would have the effect of subrogation powers in other public authority. Therefore, the Public Ministry doesn't have the power to conduct criminal investigations on the legality and opportunity of an act adopted by the legislature", reads the CCR motivation.