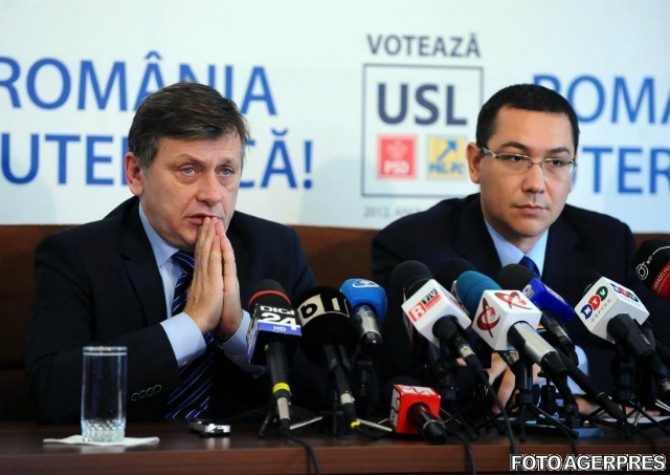 Ponta Antonescu.jpeg
Victor Ponta presented hid resignation today. A blank one. He left the burden of such a decision on the shoulders of PSD leader Liviu Dragnea.

"The divorce in steps strategy was used in USL separation. Both parties stake was the electorate not to say that USL was split because of them, but because of the opponent. As a result, s series of challenges took place from both sides around 2013. At that time, it was obvious that those fights were preparing the divorce, because a measure which is taken all of the sudden, like - by today we were friends and starting tomorrow we break party -, gives voters an unpleasant surprise, both sides lose. To the extent that things are expected, the electorate is not surprised. Victor Ponta had the political tact to proceed in such way so that USL voters blamed Crin Antonescu for having left the alliance. He now does the same with Liviu Dragnea. He doesn't just leave PSD, but he leaves the decision in the hands of Liviu Dragnea so that he will not be blamed for leaving the party. He presented his blank resignation and he says he does not want to leave PSD, but if this bothers them, then let it be them the ones to kick them out. He becomes independent from the speech, from the action, he will proceed as if he were in opposition, and Liviu Dragnea will eventually be forced to kick him out. It is exactly the same method used for the Crin Antonescu divorce," said journalist Val Vîlcu.

In other words, Victor Ponta took distance, through critics, from Liviu Dragnea, so that the break-off would be predictable. We all know that lately, in the public space, it has been discussed a possible separation of Victor Ponta from PSD, conformed only today by the former prime minister. Moreover, Victor Ponta clearly stated, when asked: "No, let's be serious! Mr. Dragnea is a politician, he has to say yes. I am no longer a politician, so I can say no."