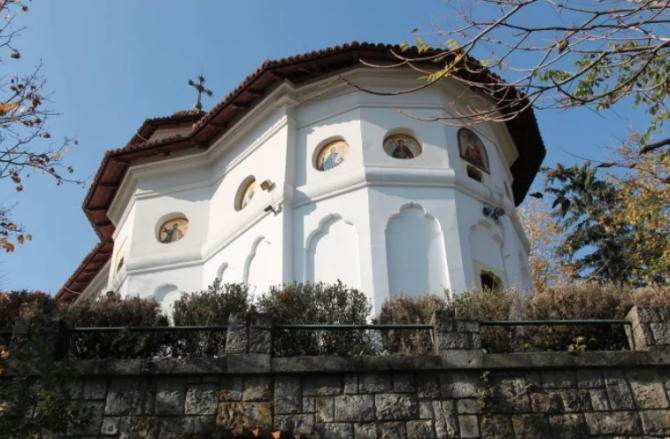 The church of Saint Nicholas “Băneasa” is one of the most interesting churches in Bucharest, at least when it comes to its location.  It is found on the Bucharest-Ploiești Road number 3-5, on the top of a hill, which overlooks the Băneasa Lake. If you are by car on your way to Ploiești, you will see the church somewhere on the left, up, as soon as you pass under the railway bridge. If you come from Otopeni airport, you will see it on the right, only for this you have to pay attention, because its charm is given especially by the discreet surrounding where it has been standing for centuries.

From the second volume of the atlas-guide "The History and Architecture of the Places of Worship in Bucharest" we learn that on the location where the church is today, there were the Văcărescu houses, built around 1755, and which were severely devastated during the Russian-Turkish war from 1768-1774. They were radically restored by 12 Saxon masters, led by architect I. Rattner, who was brought by Ienăchiță Văcărescu (1740 - 1797). We know about Ienăchiță that he was a Romanian poet, philologist and historian, a member of the old boyars family Văcărescu.

"To my followers Văcărești!
I leave to you as inheritance:
The nurturing of the Romanian language
And the honouring of our country. ” 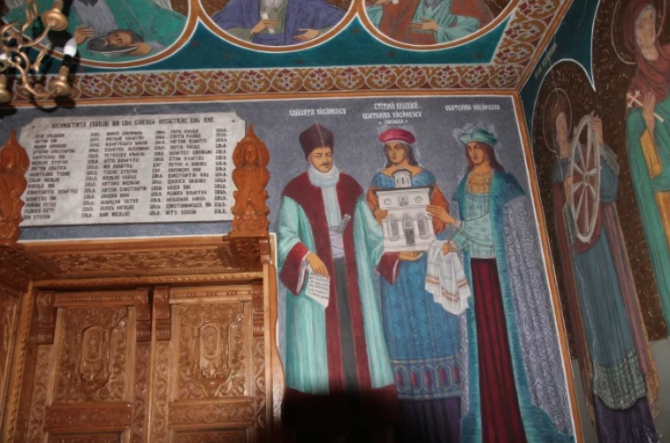 We learn from documentary sources that Ienăchiță knew a lot of foreign languages, including: old Slavonic, old and modern Greek, Turkish, Arabic, Persian, French, German and Italian. From the Historical Magazine we learn that Ienăchiță Văcărescu was the second Romanian, after Dimitrie Cantemir, who wrote a history of the Ottoman Empire. His work "History of the Mightiest Ottoman Emperors" was printed in 1863 by Alexandru Papiu Ilarian. The church of Saint Nicholas is the only remaining construction from all the buildings erected by the poet in Băneasa. 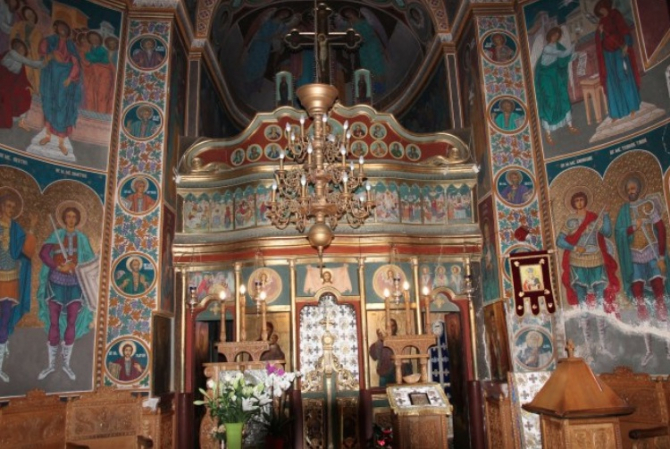 The patron saints of the church are: Saint Hierarch Nicolae of Miralichia and the Three Holy Hierarchs, Vasile cel Mare (Vasile the Great), Grigore Bogooslov and Ioan Gură de Aur. The place is a historical monument. The church was founded by Ecaterina Văcărescu, the widow of the great ban Ștefan Văcărescu (1690-1763). The construction works began before 1768 and were only completed in 1792, as it is written on the sculpted inscription (“pisanie”) above the front door. After 1845, the Băneasa estate becomes the royal property of Gheorghe Bibescu, who married Maria Văcărescu. Bibescu-Vodă repairs the houses and the church, and also begins the construction of a new palace, according to the plans of architect J. Schlatter, emphasizing the beautiful park around the church. We learn from the work “Through the Tunnel of Time” (1975) that the park was to be redesigned in Italian style, and among the decorative pieces there was a statue of Neptune, the god of the seas, brought from Italy and attributed to Michelangelo. From the same documentary source we know that in the early 1990s the statue could still be seen in the courtyard of a house on Stefan Furtuna Street (current Constantin Noica).

"When the mirror would show you

You would worship yourself.”

The church of Saint Nicholas "Băneasa" went through a long series of repairs: 1845, 1888, 1932-1934, 1940, and 1964-1971, being sanctified again in 1971 and 1992. Between 1983-1992 extensive works of restoration, consolidation, and replastering were done, and the church benefitted as well from a new painting in fresco, realized by the painter Dimitrie Bănică. The place is part of the same typological and structural series, together with churches: St. Stefan - "Călărași", St. Paraschiva - "Batiște , "Popa Soare" and others. 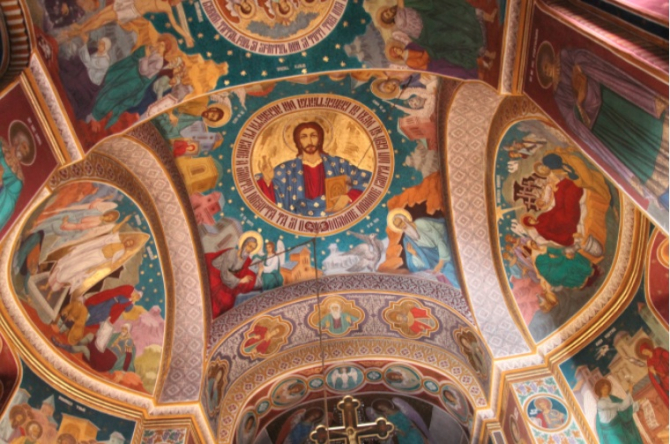 Other members of the Văcărescu family, besides Ienăchiță Văcărescu, also enjoyed the reputation of poets: Alecu Văcărescu (1767-1798), Nicolae Văcărescu (1786-1825), Iancu Văcărescu (1792-1863) and Elena Văcărescu (1864-1947 ). Of them all, Iancu is considered to be the most important, and as Nicolae Manolescu notes in “Critical History of Romanian Literature” (p. 110) - "the true poet of transition between eighteenth-century neoclassicism and forty-eighters’ romanticism is Iancu, from the third generation of the Văcărescus. He does not have the talent of his father, Alecu, he is almost barren in the erotic lyrics, but he is more talented than any of his contemporaries. (…) At his death, in 1863, he was so appreciated by his brethren that the following inscription was carved on his tomb: Father of Romanian Poetry.” Iancu Văcărescu was a contemporary of Anton Pann and Grigore Alexandrescu.

Wherever you are happy,

Of these dear words,

Which tell you what love is. "

Visiting the church of Saint Nicholas Băneasa is a good choice and it remains in ones memory especially if it is part of an itinerary that also includes the nearby Royal Railway Station. Moreover, King Mihai I of Romania Park (Herăstrău) and Vila Minovici, both in the same area, complete a landscape full of stories. 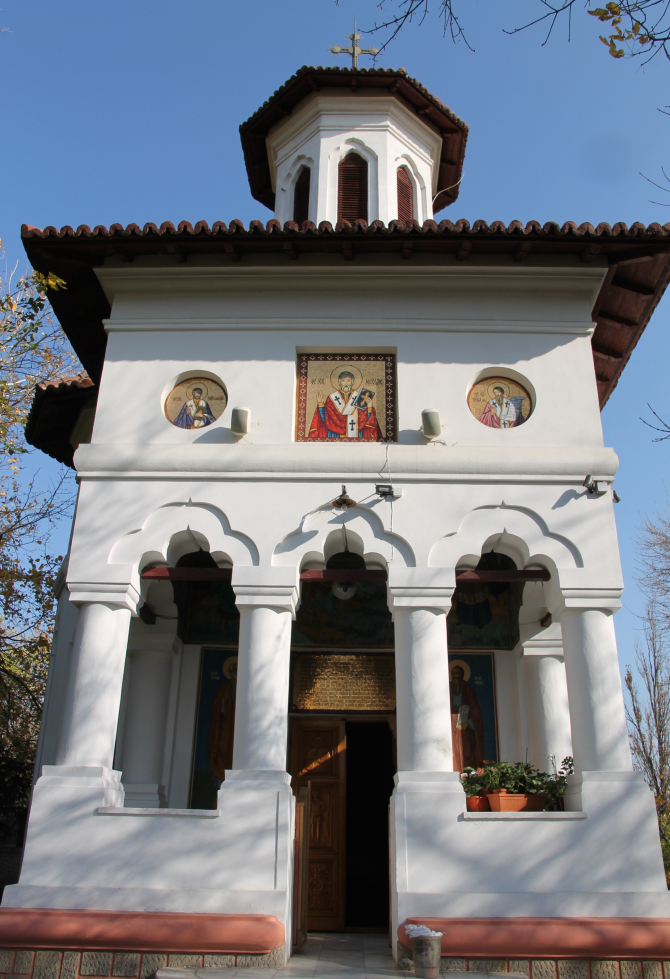 In the novel Prins (Caught), by Petru Popescu, published in 1969 and which enjoyed a great success at the time, the Engineer, the main character of the book, goes for a car ride to relax, and at one time he sees the church of St. Nicholas “Băneasa” a sign that he was about to leave Bucharest, lost in his thoughts. I cannot hide the fact that reading the book was the impetus to go and visit the place for the first time, and from there the discovery of an entire universe followed, which I find must be told to other lovers of beauty.