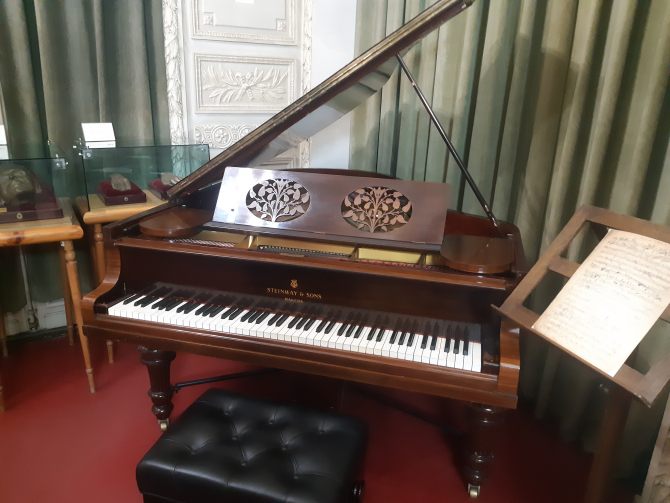 The "George Enescu" National Museum can be found in the Cantacuzino Palace, and is one of the most beautiful buildings on Calea Victoriei and of Bucharest.

The "George Enescu" National Museum can be found in the Cantacuzino Palace, and is one of the most beautiful buildings on Calea Victoriei and of Bucharest. From the museum's home page we find out that it gathers the donations given to the Romanian state (and to the museum) by the musician George Enescu (1881-1955): "according to its special profile, (the museum) supports, through the institution’s permanent cultural programmes, the Romanian and international musical compositions, as well as the interpretative art." George Enescu was one of the greatest Romanian compositors, being, among others, the author of the two Romanian Rhapsodies. They were composed in 1901-1902 (when the compositor was only 20-21!) in Paris, and premiered on the 23rd of February 1903, in a concert conducted by George Enescu and Eduard Wachmann at the Romanian Athenaeum, being published in 1904 by the Parisian musical publishing house Enoch (Éditions Enoch). The compositor passed away in Paris, in 1955 and is buried in the famous Père-Lachaise cemetery.

At the "George Enescu" National Museum, during a year, the exhibition's constituency is enriched with a musical season, which confers absolute originality to the premises. Thus convey, in a magical space, exceptional architectural, expositional and musical elements. The specificity of the premises is watched over by the memory of George Enescu and gives a significant tune to Bucharest's melody. There, on Calea Victoriei 141, we have combined the constituents by which we are reminded of the memory of one of the most representative people in the music history. 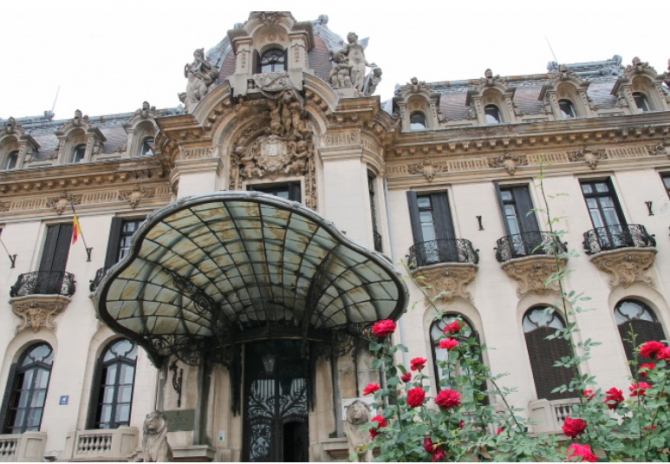 Cantacuzino Palace, one of the most beautiful buildings on Calea Victoriei and in Bucharest - DC News Archive

Of all the objects that can be found in the museum: photos, manuscripts, decorations, drawings, busts, musical instruments, tuxedo, mortuary mask, violin, I clearly remember the C.BECHSTEIN upright piano and the Steinway & Sons piano. Both were brought from Paris, after his death. They were not well-traveled pianos, but it didn't prevent them form becoming famous.

The Cantacuzino Palace, for over half a century, does its duty of generating and regenerating music of the highest quality, influencing especially young musicians. Therefore George Enescu was and will remain a guide, as only geniuses can be, even after their disappearance, when their creations continue to be taken as a model.

The Cantacuzino Palace, which is over one hundred years old, was built after the plans of the architect Ion D. Berindei in the French baroque style. From the museum's site, we learn that for its construction (1901-1903) commissioned by Gheorghe Grigore Cantacuzino, Berindei worked with renowned artists of that time, among which: G. D. Mirea, Nicolae Vermont (T. Aman first student) for the mural paintings, the architect Emil Wilhelm Becker for the sculptures and sculptural ornamentation and Krieger House of Paris for the interior decorations: tapestries, chandeliers, lamps and stained glass.

A reunification of Enescu's dimension takes place with the George Enescu Festival, when artists from all over the globe show gratitude by their presence and their music, to the memory of the great master, whom has become an international symbol. In the 41/42 issue of the 20th of September 2019 of Literal Romania, we may find the most recent article dedicated to George Enescu:

"Taciturn, somehow shy or introvert, almost careful not to bother anyone with his presence, George Enescu is an artist with so many valences, that still await to be discovered. There are many images that capture his subtle state, photos, recorded films, paintings by Baba. In the last years, with great tenacity and plain strategy, the directors of the Enescu Festival have taken action more, clearer, more determined and firmer so that greater musicians and orchestras interpret his music. (...) This year's edition seems to me more appropriate to his renaissance, luminous and visionary personality."

The eyes of Enescu, Literal Romania

The author describes George Enescu as "generous, warm, dedicated to his passion, always simmering as an active volcano, he lived absorbed in the universes of his mind, in fabulous sonorities that he created or interpreted. He tremendously gifted to the people around him, to those he initiated, formed, shaped, to those who were around him, to the spectators of the hole world."

A bond was created between the George Enescu Festival and the National Museum "George Enescu" because most of the numerous foreigners that come to the Festival, wish to also visit the Museum and to see up close the things that belonged or that were touched by George Enescu. The Art Collection Museum, department of the National Museum of Art of Romania, works on creating a circuit of paintings with musical themes, giving good reason for the music loving visitors of Bucharest to also come in contact with the world of visual imaging thus mixing the two during their stay in Romania's capital. 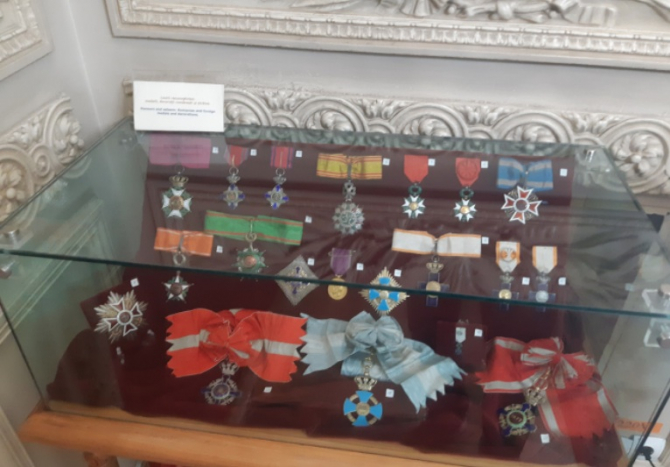 From an article published on descoperă.ro, signed by Mariana Petrescu, counselor to the "George Enescu" National Museum we find out that, in 1932, George Enescu was the first Romanian musician to become a member of the Romanian Academy.

"The Enescus lived in an apartment in the current George Enescu street, but also in another in the Cişmigiu area, and in the last two years, before leaving the country in 1946, they lived in the house behind the palace, the current "George Enescu" Memorial House. George Enescu didn't enjoy wealth or luxury. He stated in his memoires that: where I work, I don't need luxury, a pine table and suitable lighting is enough".

George Enescu was eight years old when another genius from Botoșani Mihai Eminescu died. Maybe this detail has no importance or maybe it represents the ax of a brilliant very precious seam, a creative relay that changes form from words to song and vice-versa, so that they can ultimately combine. Both dedicated significant importance to nature and folklore, stand that generated the unparalleled creations with which we can rejoice and take pride today.

At the end of the '70, Nichita Stănescu stated in a show on National Television: "the most beautiful quatrain, shall I ever be capable to write it, would have four verses: Eminescu, Grigorescu, Enescu, Brâncuși".